Looking for development or design resources to help develop your next Roblox project? Worldscape can help, we have developers from every skillset who average 7 years experience in their area of expertise, to get it done fast, and get it done right. Learn More

According to RTrack analytics, Roblox hit 119M+ MAU in January of 2020. In December, RTrack data showed a MAU of 113M+ users in the 30 days preceding December 31st 2019. Data recorded by RTrack in January, measuring the 30 days before January 31st, shows a monthly active user count of roughly 119,355,918 user accounts, an increase of more than 6 million on the previous month. Shown below is data from an August 2019 Business Insider article [1] and RTrack’s most recent data. 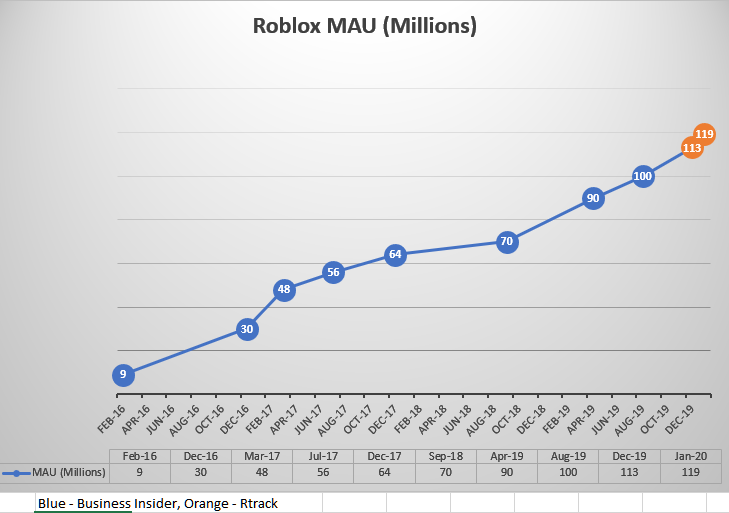 This hints at strong user growth for Roblox in terms of monthly active users, with a large jump in players. There also evidence of improved retention of users; January’s data shows that 8.3% of the randomly sampled group (totalling 80,200 users) were online in the past month, compared with 8.24% of users in December 2019 (same sample size).

RTrack’s value for January 2020 MAU is an estimate based on a randomly selected sample of 80,200 Roblox accounts.

[1] “Roblox has eclipsed Minecraft with 100 million users — highlighting the popularity of ‘digital hangouts'” As of 12th January 2020: https://www.businessinsider.com/roblox-user-growth-surpasses-minecraft-2019-8?r=US&IR=T